On June 23, 1989, the very first edition of the Echo of Cantley was published. The population of the newly minted Municipality had a community newspaper to call their own. 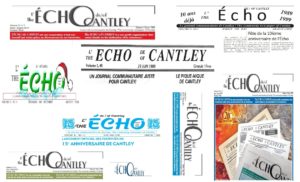 Humble Beginnings While it was simple in appearance, a sheet of 8.5” x 14” paper printed on both sides with a centrefold, (no, not that kind of centrefold) its 8 pages of content was both sophisticated and representative of day-to day life in Cantley. The newspaper was run by a “Production Committee”. Early members included Steve Harris, Carole Brisebois, Michelle Martel, Jean Lavictoire, Dominique Rakotomanga and Gisèle Gariepy. Huguette Lessard would join shortly thereafter. Mme Gariepy was the first “graphiste” and a flourishing revision team busily dotted the i’s and crossed the t’s on articles written by the lone “journaliste”, Michèle Martel.

By the second edition, July 28, 1989, the Echo was a whopping 12 pages. The committee structure had morphed into the traditional model still in use today. Steve Harris was the first Editor, a role he would hold for more than 15 years, until he succumbed to the allure of municipal politics in 2005, running successfully for Mayor.

The now familiar tabloid format was adopted by the November 1989 edition. 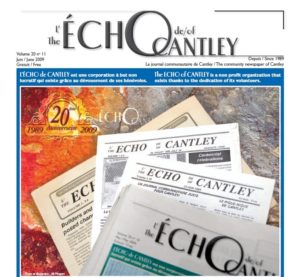 In June 2009, the Echo celebrated its 20th anniversary with an all special edition. June 2009 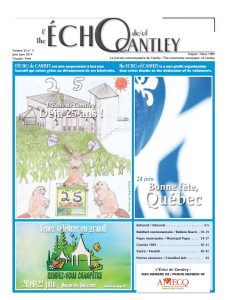 In June 2014, the Echo celebrated its 25th anniversary with special edition where the front page is the winner of the drawing contest organize for the occasion.